Help to the Community 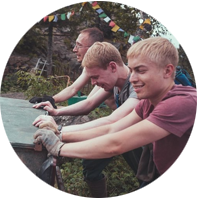 If you come to Shedrub Ling as a guest and accepted our hospitality, it would be nice of you to offer our community some help in simple household chores: for example, to bring water from the lake, to collect brushwood, to cut firewood. This way not only you will be able to partly experience the daily difficulties which the community faces on the mountain, but also you will contribute to the construction of our Buddhist monastery and to know better the Mount Kachkanar, having seen beautiful spots that lie away from tourist tracks.

Shedrub Ling possesses probably the most extensive collection of Buddhist literature in Sverdlovsk region. In total the community library has more than one thousand books, half of them concerns directly Buddha's Doctrine, its history, culture, Buddhist art and traditions. Either you want to learn fundamentals of the Buddhism or some of its specific aspects, our library for certain has a book which will answer your question. 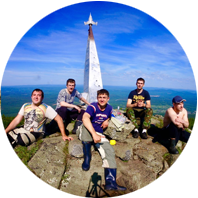 The Mount Kachkanar is well-known for the beauty of its nature, therefore you really must walk on the mountain top during your visit to Shedrub Ling. You will see many picturesque fantastic rocks scattered here and there, (including the well-known Verblyud (“Camel”) rock which as they say has given the name to the mountain), alpine meadows described by the British geologist Roderick Murchison who has visited Kachkanar in the 19th century, and also other sights of recent time — the monument to Yury Gagarin's flight "Rocket" and bas-reliefs of "The Poets Walk ". Near top there is an artificial lake suitable for bathing. At the top, in 150 meters to the south from Shedrub Ling there is a garden-house, and between the rocks many spots where you can put up tents in the Summer. 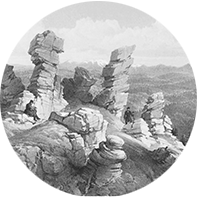 If you have come as a group, then we recommend to ask for a free excursion across the Monastery territory. You will learn about the exceptional nature of the Mount Kachkanar, about how the Buddhism has appeared in the Urals, about the personality and mission of Shedrub Ling founder, lama Tendzin Dokchit and, about the beginning and the progress of construction, about the main sacred objects of Mount Kachkanar — Stupas and so on.

We plan to organize a small museum of nature of the Mount Kachkanar, Shedrub Ling history and Buddhist art.

FPMT Educational Group "Lama Tsongkhapa" regularly organizes in Shedrub Ling short-term educational courses developed by the Foundation for the Preservation of the Mahayana Tradition: "Buddhism in a nutshell" and "Meditation 101". These courses are designed for several lessons within a couple of days, they are intended for those who would like to know the basics on Buddhist doctrine and practice. The courses are free of charge, you can join them at any moment. The dates of future courses will appear in announcements. 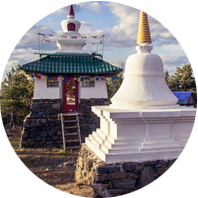 One of the purposes of construction of Shedrub Ling is to ensure that everyone in the Urals has free access to Buddha's Doctrine, to all its opportunities to improve one’s mind and virtue. One of such opportunities is interaction with sacred objects: Stupas, statues and images which the Buddhism considers as an effective tool for transformation of one’s consciousness towards virtue.

If you are interested in your spiritual growth and development, then you should seize the fine opportunity coming in such place like Shedrub Ling. The right way to interact with Buddhist Stupas and statues for maximum benefit for you and others is explained here.

We have a small shop where you can get souvenirs of your visit to the Mount Kachkanar, most of them is hand-made by the Community members. All the revenue is spent on daily living needs of Shedrub Ling, construction and improvement.